Why do I have spasms and what do I do about them?

There are many reasons you might have spasms and the hard, painful clenching of contracted muscle can hurt enough to wake you up in pain.  What you do is not the same for everyone

Overuse or overtraining can cause your body to go into spasm, especially if a nerve is involved.  This serves two purposes: it gives you temporary if somewhat distorted support and gets you to stop what you are doing.  Use an analgesic that reduces pain and moves blood like aspirin or Dr. Christopher’s Antispasmodic formula or a Chinese martial arts dit dat jiao trauma formula.

A dit dat jiao is a liniment or topical tincture made up of herbs that increase circulation (including microcirculation of the capillaries), release the muscle layer and relieve pain. If there is a lot of redness and swelling a cooling effect can be added with mint or menthol the first day since this relieves inflammation without the bad effects of ice.

There has been controversy about using ice when a spasm first starts.  Don’t.  In Chinese medicine ice has always been proscribed because it drives the pain in deeper while giving surface relief.  Blood can congeal (clot) deep inside, blocking the circulation necessary to nourish the tissue, so it takes longer to heal the spasm.  Heat both increases circulation and relaxes the spasm.  Western medicine has finally caught up with Chinese medicine, although some trainers and doctors have not yet caught up with the research.

Related to overuse is poor functional posture which over time stresses some muscles and produces weakness in others that ought to work together.  An example of this is “computer neck” where the SCM, trapezius and other neck muscles become rigid because the head is held too far forward.  Yoga, Pilates and MELT classes can work on correcting posture while structural integration can  separate conjoined fascia so that muscles can work independently. While nutrients and herbs can reduce pain it is important to improve the functional posture to eliminate the cause.

Lack of magnesium which is an endemic condition in America can also affect cramping. Dietary magnesium is down 50% in the last 30 years as soil has been depleted by industrial farming and erosion.  Oral magnesium is difficult to absorb and I have been able to reach good testable levels using Jigsaw Sustained Release capsules twice a day plus topical magnesium oil from the ancient Zechstein inland sea.  I also do periodic soaks in Epsom salts or Magnesium Chloride salts.

Lack of iron is also a cause of spasmodic leg shaking but should not be supplemented unless blood tests low.  The Chinese cure would be to eat liver for such Liver Wind conditions.

The widespread use of statins for cholesterol has led to a wholesale depletion in Ubiquinone (Coenzyme Q10,) the body’s natural antioxidant.  While statins have tested as useful for males who have had heart attacks, the usefulness for anyone else is unclear.  Cholesterol is the body’s natural bandage for inflamed arteries and is the building block of steroid hormones and brain tissue, so there are good reasons to not lower it.  Statin use is known to frequently lead to muscle pain and more rarely rhabdomyolysis, a severe condition which affects the muscles.  The most common signs and symptoms of rhabdomyolysis include:

The higher the dose of statins, the higher the risk of rhabdomyolysis becomes. The risk also increases when taken in combination with certain drugs.

Low B vitamins can also cause spasms. Try methylfolate instead of folic acid and methylcobalamin instead of normal B12, particularly if you know you have the MTHFR gene snip.  (If you don’t know I’d take these forms anyway.) Low doses three times a day are best and take a methylated B complex.

Although it does not seem intuitive, eating gluten can cause muscle and joint pains. Once the inflammatory proteins get past a leaky gut they circulate with the blood all over the body, causing pain

Diseases like Parkinson’s and Essential tremor can cause hard spasms due to the continual shaking.  Work on increasing liposomal glutathione, CoQ10, Vitamin C and Folate as well as a full component of minerals, detoxification and exercise.

Acupuncture is very good for spasms, on both a local and distal level.  It is not necessary to needle directly into a spasm, but if the spasm is not too hard or sensitive,

local needling can increase circulation into the spasm.  But needling on the opposite side, along the meridian or into special points can signal the brain to release muscles or endorphins.

Pain is a huge topic.  Pain can come from trauma, pressure on nerves, from the wear and tear of osteoarthritis, inflammation due to allergens or pollutants that can set off autoimmune reactions, low Vitamin D status, expanding cartilage under weak bones (osteomalacia), retained placentas, stress, anxiety, PTSD, even viral causes.  So the first order of business is to get diagnosed, not only by a western MD but by an herbalist or doctor of Auyrveda or Chinese medicine who knows how do pattern diagnosis.  Pain specialists, both eastern and western may be better able to work with chronic pain than general practitioners.     END_OF_DOCUMENT_TOKEN_TO_BE_REPLACED

Pain can be caused by physical or emotional blockages to the free flow of blood and energy. Gate theory says that a little pain can block out larger amounts of pain.

There are different nonpharmaceutical ways to deal with the pain.

According to gate theory, a little pain drives out a larger pain, up to a certain threshold. So for instance I might drive my index fingernail into my thumb when pain starts to get too bad. END_OF_DOCUMENT_TOKEN_TO_BE_REPLACED

This study is quite important because it explains one way that acupuncture works to regulate pain at a cellular level.  While those of us who have experienced acupuncture need no proof that it works for pain, it is still useful to have a mainstream university explaining the mechanism for 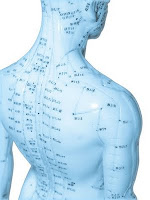 doctors and (dare I say it) insurance companies who restrict coverage to one or two codes.

Pain is regulated in a variety of ways by acupuncture.  Like all medicine there is the reassuring placebo effect.  But gate theory explains how the presence of a little pain drives out great pain which is why lancing or electrostimulation works.  And when a needle is inserted, blood rushes to the site with all of its hormones and immunological constituents.  Here is one other way acupuncture helps:

U Michigan Study; How Acupuncture Affects the Brain’s Ability to Regulate Pain

The University of Michigan Health system has just released the results of a new UM study that showed Chinese acupuncture affects your brain’s ability to regulate pain.